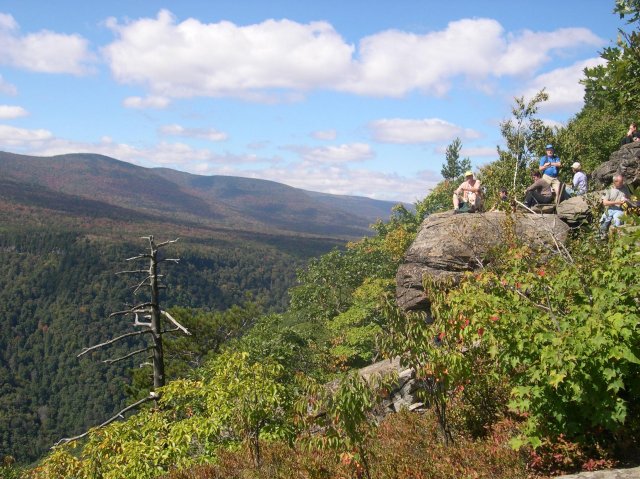 The Catskills Lark in the Park was established in 2004 to celebrate the 100th anniversary of the creation of the Catskill Park. Citizens of New York and visitors to the area should be grateful that over 100 years ago, the New York State Legislature saw fit to protect the forest resources of New York, first through laws and finally through an amendment to the New York State Constitution.

In November of 1894, an amendment to the New York State Constitution went before voters and was passed by the citizens of New York. In part, the Amendment stated that “The lands of the state, now owned or hereafter acquired, constituting the forest preserve as now fixed by law, shall be kept as wild forest lands. They shall not be leased, sold or exchanged, or be taken by any corporation, public or private, nor shall the timber thereon be sold, removed or destroyed.” This amendment took effect on January 1, 1895 and the Forest Preserve lands of the Catskills and Adirondacks were permanently protected as Forever Wild Forest Preserve lands.

Today New York is very lucky, as the Catskill and Adirondack Parks are nationally unique as a checkerboard of public and private land; a grand experiment in how nature, even wilderness, and human society can coexist in a landscape. Our open space resources and outdoor recreation opportunities are greatly enhanced by the thousands of acres which have been protected and are open to the public.

State public lands in the Catskill Park fall into several different classifications and are managed by the NYS Department of Environmental Conservation (DEC) in a variety of ways depending on their location, size and remoteness. The diversity of management categories allows the State to provide for a variety of open space values, including public recreation, wilderness preservation, historic preservation, and long term maintenance of wildlife habitat and natural resources.

The Catskills contain numerous mountain ridges and hundreds of peaks. However, there are 35 Catskill peaks boasting heights greater than 3500 feet in elevation, and people who hike to the summits of each of these peaks earn their membership in the Catskill 3500 Club.

Five of the Catskill peaks, Hunter, Overlook, Tremper, Balsam Lake, and Red Hill, have restored fire towers on their summits; remnants of an era gone by when forest fires were spotted from the peaks of mountains. The Catskill Fire Tower Project restored these towers in cooperation with other groups and the DEC, making them safe so that the excellent views and educational aspects of the towers can now be enjoyed by the public. Today volunteers staff the fire towers every weekend between Memorial Day and Labor Day, allowing visitors to climb and enter the towers to observe the majestic vistas and be educated by Fire Tower Stewards at the same time.

Both primitive and amenity camping opportunities abound in the Catskills. Primitive camping is allowed in the Wilderness and Wild Forest areas of the Catskill Forest Preserve, so long as you follow certain guidelines designed to protect sensitive summit forest communities and water quality of the streams. Wilderness camping rules include not camping within 150 feet of a trail, stream, or pond, roadway and not above 3500 feet in elevation except in winter.

You can also contact the Catskill Mountain Club at activities@catskillmountainclub.org, the New York-New Jersey Trail Conference’s Catskills Regional Office at 518-628-4243 or the Catskill Center at 845- 586-2611 for more information on the Catskill Park, it’s hiking and camping opportunities and for general park information.